From unassuming privateer to one of the world’s best enduro riders, Jonny Walker has experienced a lot during the last decade. For Walker, there is nowhere more rewarding, and in some cases agonising, than at the Red Bull ErzbergRodeo. KTM recently caught up with the talented Brit to chat about his long history with the Austrian-based event…

If extreme enduro riders are like gladiators, then ErzbergRodeo is their colosseum. An event with a fabled history, it’s the world’s toughest single-day enduro – a race where only the strongest racers truly do survive. A three-time winner of the Red Bull ErzbergRodeo, Red Bull KTM Factory Racing’s Jonny Walker has endured the highs and lows of the event, which takes place at an open-pit iron mine in Eisenerz, Austria.
2020 marks 10 years since the Brit first set foot on hard enduro’s hallowed ground back in 2011. But with the event at the ‘Iron Giant’ (as it is affectionately known) taking a breather until 2021, Walker, like everyone, will have to wait another 12 months before entering the arena again and fighting for a fourth win.
Looking back on the highs and lows of the last 10 years, Jonny recalls some of his best Red Bull ErzbergRodeo moments and considers why one day soon a four-stroke could win this iconic race. 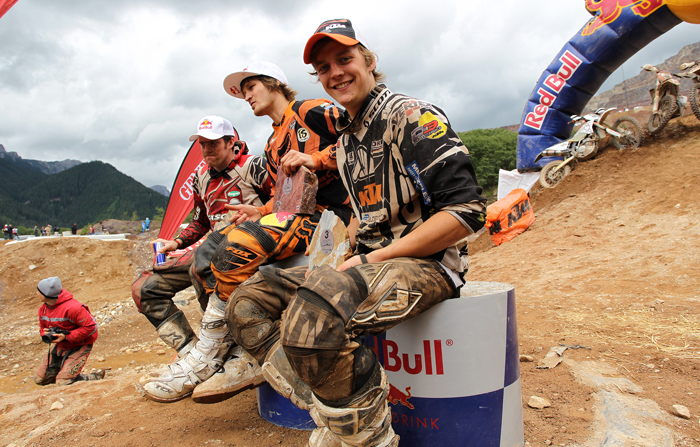 2011 – Privateer Podium
JW: I drove out to Austria in 2011 to race it for the first time. I didn’t really know a whole lot about the race or what I was going to do. Arriving at the village and seeing the Iron Giant was cool, but it didn’t give me goosebumps like it does now. Now it’s a different story because all the memories come flooding back – all the highs and lows. It’s such an important race in enduro and the physical size of the Iron Giant adds to that. I finished third that year and on the way home stopped at the KTM headquarters to sign a factory contract. It’s crazy to think how my life’s changed since. It’s harder for a privateer to rock up and podium because the depth of talent is so deep now. 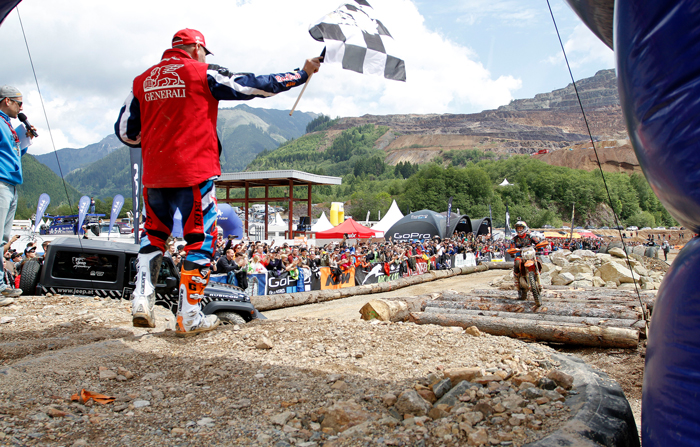 2012 – Debut Win
JW: I didn’t have any pressure entering the race in 2012, despite being the top KTM rider. Back then I was still working as a window fitter, even though I was a Pro rider, because it was all I knew, and it gave me a routine. I still had this other life outside of racing. I didn’t treat it like a job because at home I was still fitting windows during the week. I raced and had fun. The race itself is a blur, but I remember crossing the finish line and Karl Katoch handing me the chequered flag – a massive wave of emotion came over me. It was amazing to win.

2013 – Armageddon
JW: It was like Armageddon for 2013. Conditions were biblical. I qualified on the front row and Graham Jarvis was on the second row. I knew he was my toughest competition, so I was fired up to make as much time as I could before he started. But I drowned my bike off the start. I’m still amazed that we started in that water, but that’s the sort of stuff that makes ErzbergRodeo famous. I was stuck at the side frantically draining water out of my bike when Graham came past. I finally got going and pushed as hard as I could, but conditions were horrendous and recovering that amount of positions was tough. I passed about 100 riders for fourth, but I was gutted about it at the time. 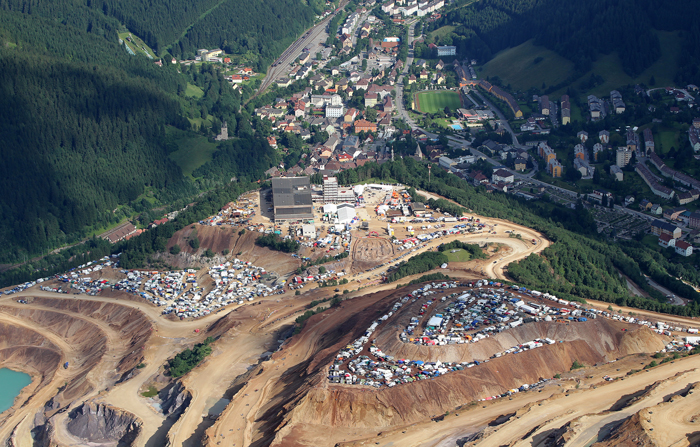 2014 – The Perfect Race
JW: I still dream about 2014. I remember finishing and realising that I never fell off the bike, not once. Everything went so perfectly and that almost never happens at the Iron Giant. I got the holeshot and didn’t see another rider for the rest of the race. I won by about 30 minutes, which is unheard of now.

2015 – Teamwork To Survive
JW: I think 2015 was good for the sport because people who don’t normally follow hard enduro tuned in. It definitely lifted things to another level. But for a racer, it was a strange situation to be in. We race to win, but on that day nobody could win without helping each other. It was weird to suddenly change your mindset from racing to pitching in together like that. The track was so steep, no one could get to the top of that climb. I just remember speaking with the guys and going with the situation. People will talk about that Downtown section for years to come, so it’s nice to be associated with that piece of ErzbergRodeo history. 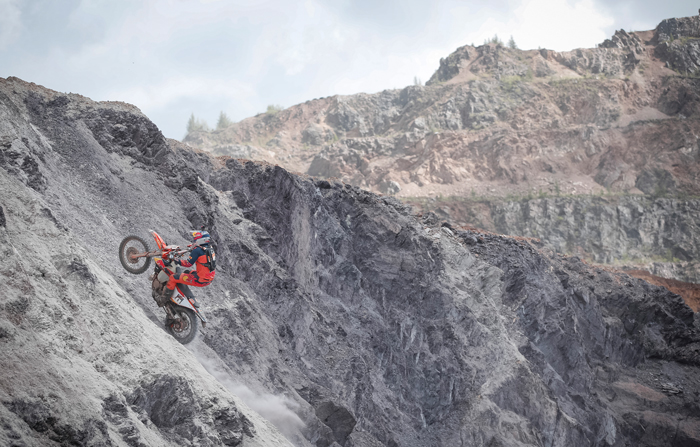 2016 – Forced Spectator
JW: 2016 was the year I watched it from the sidelines. I broke my leg leading the SuperEnduro World Championship and unfortunately had to sit the race out. It’s a totally different experience being there as a spectator. As a racer, ErzbergRodeo is a pressure cooker. It builds weeks before you go and race day is stomach-churning. That was the only year I’ve been able to eat breakfast without wanting to vomit before the race! 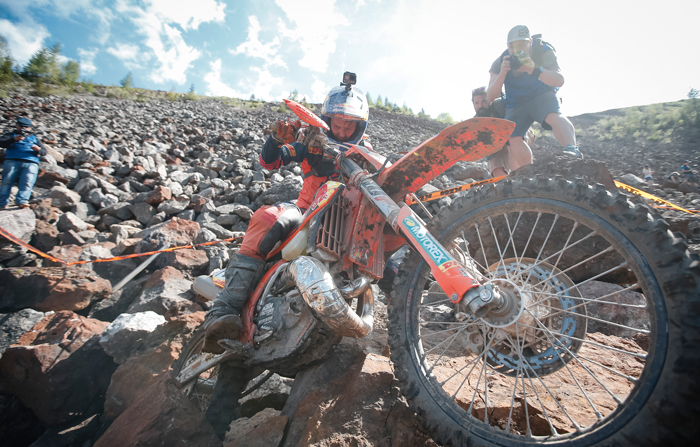 2018 – The One That Got Away
JW: It still kills me now to think about 2018 because I just made one silly little mistake on a relatively easy section and lost the race. I was right on Graham (Jarvis) at Green Hell and we pushed our way past Billy Bolt and Mani Lettenbichler into first and second. Exiting the section I was on his tail, but let my front wheel wash out on a root riding down the bank and it got wedged on a tree. Due to the steepness of the bank, I struggled to get it out. With only Dynamite and Lazy Noon left, I couldn’t get him back. I finished 40 seconds behind, so it’s definitely the one that slipped away. 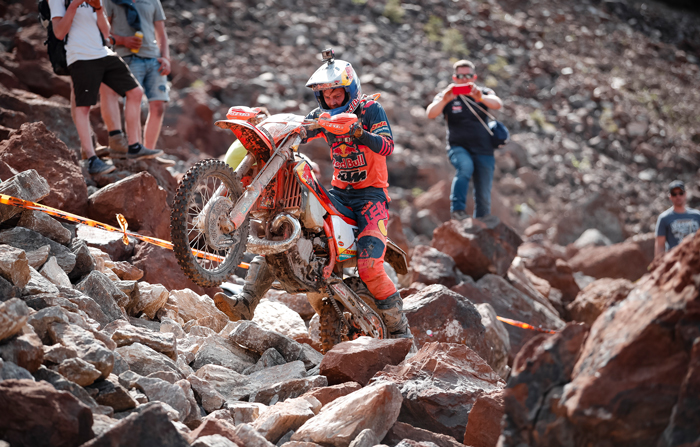 Why the KTM 300EXC TPI is the best tool for the job
JW: The KTM 300EXC TPI has proven itself so many times at the race. It’s become the best bike for the job for riders of all abilities. For an amateur rider, there’s very little you need to do to it. The package is light, responsive and near-bulletproof reliable. Now, with the TPI fuel injection, KTM have refined that further. It attacks hillclimbs like nothing else. Also, altitude isn’t a factor – from the bottom of the quarry to the top of the mountain and back down again, there’s no change in power delivery. It just works. 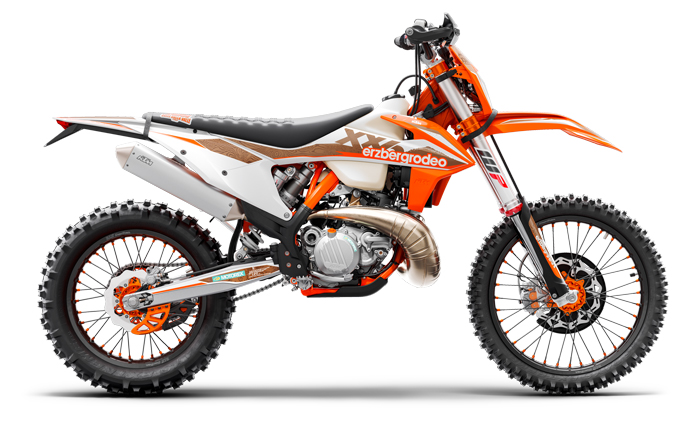 Why a four-stroke can win ErzbergRodeo
JW: I believe that the KTM 350EXC-F could win Red Bull ErzbergRodeo one day. It’s actually something I’ve been thinking about for a while. At this moment the KTM 300EXC TPI two-stroke has the edge because it’s a great all-round package, but with some focused testing the 350F could do it. In the UK, I race the KTM 350EXC-F for multi-lap extreme races because the power delivery is consistent and strong. At ErzbergRodeo, the 350F would hold its own off the start and right up to Carls Dinner. I think that is the pinch-point of the race – getting the bike through there without issues would be key. After Carls Dinner, things are equal again with the two-stroke. Maybe one day…